Photos of our Tour

My Tweets
Follow Backpacking Around the World on WordPress.com

From River Kinabatangan we had a pretty easy journey down to Semporna (where we were heading to Scubadive).

The driver who had collected us from Sepilok, took us from the river to a lay by on one of the main roads where ‘his friend’ one of the local coach drivers picked us up on the local bus which was going to Semporna. This took about 4-5 hours.

When we arrived in Semporna, our main mission was to go and try to find Sipadan diving passes. If you have researched anything about Sipadan you’ll probably know these are pretty difficult to find, and there are loads of rumours about certain dive shops and whether the passes are legitimate or not. Also most of the diving passes come with accommodation packages as well, so anyway it was all a bit of a nightmare trying to arrange.

So we set off from the bus, sticky, sweaty, tired….the usual! and now semporna is not exactly the most glamorous of places which surprised us considering its the gateway to one of the most highly regarded dive spots in the world. There is a lot of poverty and as soon as we started walking through the town young children were clawing at us for anything, even the water I was drinking.

We traipsed around a load of the dive shops and eventually decided what to do….I won’t go into every boring detail but in the couple hours of walking back and forth we had to go through a fish market and by the harbor, anyway I started to feel really rough and starting throwing up on the side of the street. Danielle was really good, and checked me into the closest hotel which had a private bathroom sent me upstairs and carried on sorting out booking the diving trip! I was pretty useless in all of this.

But the next day we headed off to the island of Mabul where we were staying in the ScubaJunkie resort for three nights. Luckily I was feeling a bit better, and it was my 26th Birthday woop! I was too ill to dive that day but we just chilled out which was nice. 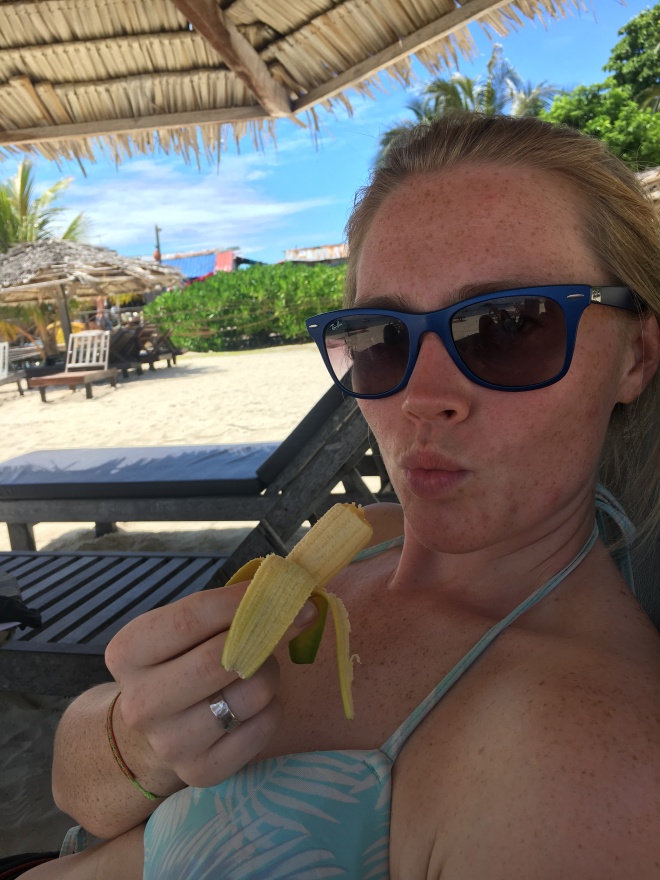 So the next day we started our PADI Advanced open water course. We wern’t really planning on doing this but as we really wanted to enjoy Sipadan it was recommended as its quite a deep dive (with the open water you can only go to 18m but with the advanced you can go to 40m).

Our instructor Phil was really great, and again we were lucky as it was just the two of us in the group. In this course you learn a lot more about buoyancy, getting your weight right, navigation and you get to pick a couple of specific dives. We picked the night dive and drift dive. The night dive was terrifying and I almost had a panic when we first went into the water, but I clung to Danielle the whole time and survived!

After three nights, when the course was finished we went back to Semporna and stayed in a hostel for a couple of nights.

We had managed to find a Sipadan pass but not with accommodation which meant we had to stay in Semporna and get the boat from there. The company we used were a ‘local’ company, so run by Malaysians. A lot of the dive shops are run by Chinese, Brits, Americans. It was really good, a tad dis-organised but all the equipment was decent! and we had a great guide who spoke really good English. 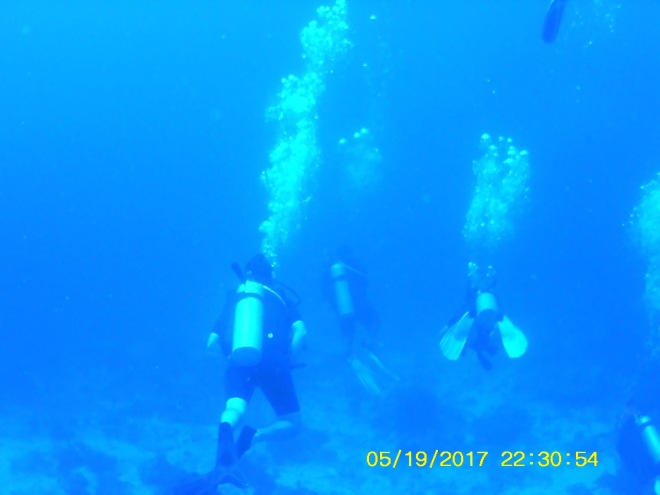 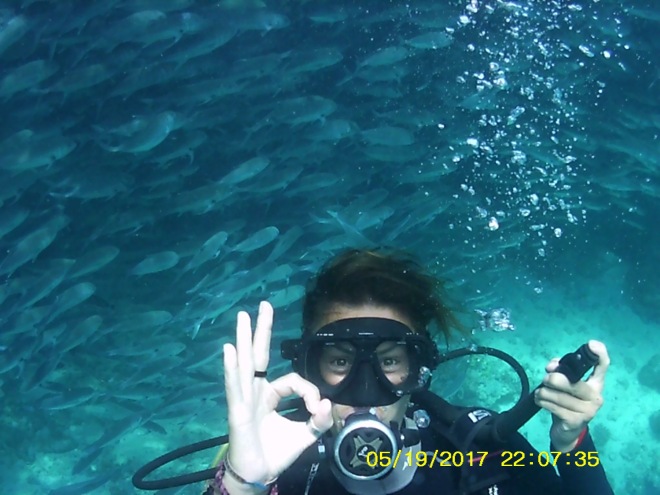 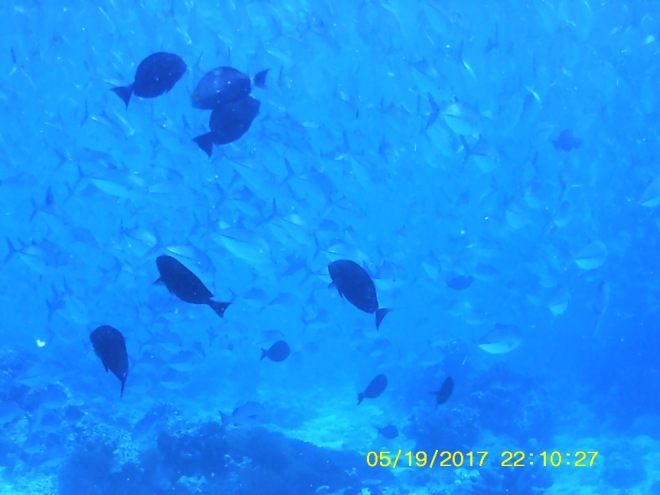 From one of the most beautiful (underwater) places in the world to Kuala Lumpur. Follow us on the last part of our amazing journey.

We then made our way to Penang airport, a nice 0430 start to the day! We boarded the tiny little propellor plane ✈️ …both slightly nervous! But got to Kota Baru in no time. It then took us an hour drive in a Grab taxi to the Kuala besut ferry terminal. This cost 65 MYR. The ferry ticket to the perhentian kecil island is 70 MYR return, there are also some extra costs; island entrance fee: 30 MYR and another little taxi from the speed boat to the beach: 2 MYR. From the boat we trudged along the beach, now in the swealtering sun, and found a little shady area to dump our bags whilst we wondered around looking for accommodation and dive schools. We eventually ended up going to ‘Oh lala’ dive centre and chalet. After a boiling swim in the 30deg water and our classic vegetable fried rice lunch, we passed out for the rest of the day after having only a couple hours sleep the night before. 😴

The next day we started out PADI open water course. We were really lucky as it was only Dani and I in the group, our instructor was a lovely girl called Lucy who was from Buckinghamshire. She was really great and calmed us (me) down a lot….Danielle will probably remember my sobbing the night before about getting a PE or having to go into a decompression chamber. But I’m still here to tell the tale! and have definitely caught the diving bug. We did all our skills tests not far from kecil island and then we got to do a few bigger dives; lots of reef, and an artificial wreck (three sunken police boats).

On our last day we got to explore the island a bit more which we hadnt had time to do yet so busy with the course. We walked across to the other side of the island…after getting lost and passing through what seemed to be the islands dumping ground! One big lesson we have learnt this trip is things are not always how you imagine,, and when your looking at peoples instagram getting jealous the photo will not always represent whats going on. 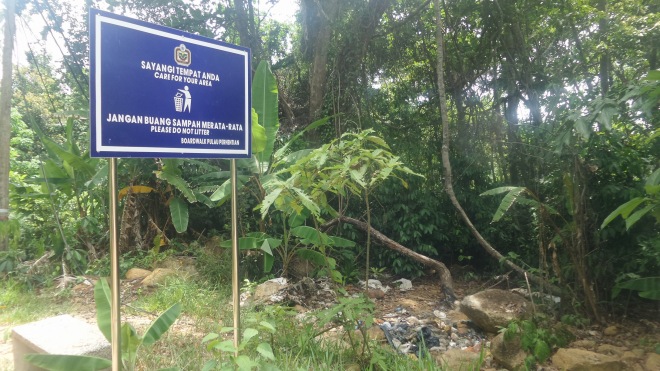 Anyway we eventually did manage to cross the island and reach the beach and much more expensive resorts and found a lovely little cove to have a swimbo.

The day then came when we had to leave the lovely perhentians, say goodbye to Lucy and everyone at ‘oh lala’, the tasty ‘no name’ we had had everyday for lunch and elly a lady who worked at one of the front restaurants who was always looking after us!

Someone obviously didn’t want us to leave as the heavens suddenly opened, the storm was so rough the boats were about to be cancelled…but in true asian style they thought they’d give it a go. So we all crammed onto one of the speed boats, buckled up a life jacket and clung onto each other making man over board plans, but credit to our driver, who had been on the phone most of the journey he got us there in one piece! That night we stayed in a lovely little guest house run by a malaysian couple who gave us lunch and took us to a local restaurant for dinner. In the morning we got a flight from Kota Baru to Kinabalu, Borneo. Now this part of our trip was a bit if a surprise addition so we hadn’t planned it quite yet!